107 apartments OK’d at Queen and Geary 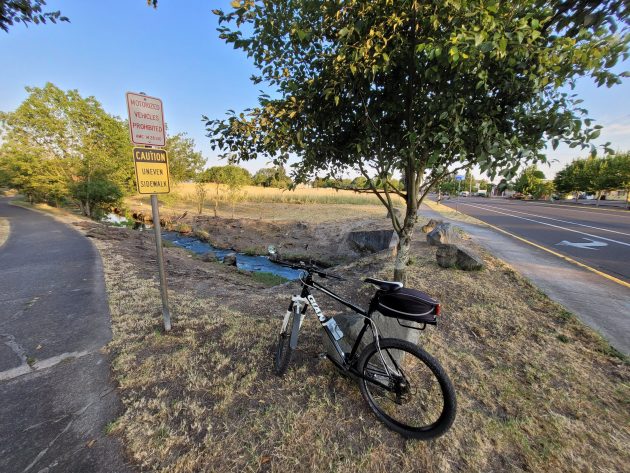 Looking across Periwinkle Creek at the grassy field where a developer is planning to build three apartment buildings totaling 107 units. Geary Street is on the right, the Periwinkle Bikepath on the left.

The southeast corner of Geary Street and Queen Avenue in Albany will look different and busier when a developer goes through with plans for three apartment buildings there.

The Albany community development director, Matthew Ruettgers, has just approved a site plan for the 107-unit apartment project planned by Paradigm Properties of Eugene. The decision becomes final unless appealed by the Aug. 5 deadline.

The site is just north of another apartment complex, The Park. South of Queen, it is bordered by Geary Street on one side and Periwinkle Creek on the other.

Neighboring  property owners within 1,000 feet were notified of the site plan review. One couple, Bill and Darlene Rompa, submitted written objections. They said among other things the site has become a wildlife area and should be turned into a park dedicated to the young mother and infant who drowned in Perwinkle Creek during the flood of January 2012.

They suggested that the long-vacant former Mega Foods supermarket across Perwinkle Creek should be demolished as  that would be a better place for apartments.

The city’s response to those suggestions was that these were private properties and the city can’t decide what to do with them.

The plan for apartments shows 79 one-bedroom units and 28 units with two bedrooms each, along with 153 parking spaces.

The site plan was approved, with a number of routine conditions, because it meets the review criteria in the development code and the site is zoned for medium residential use, which allows for apartments.

One of the conditions is that an existing driveway on Geary Street be closed and two new ones be built.  The one closest to Queen Avenue must allow for only right-hand turns in and out. (hh)