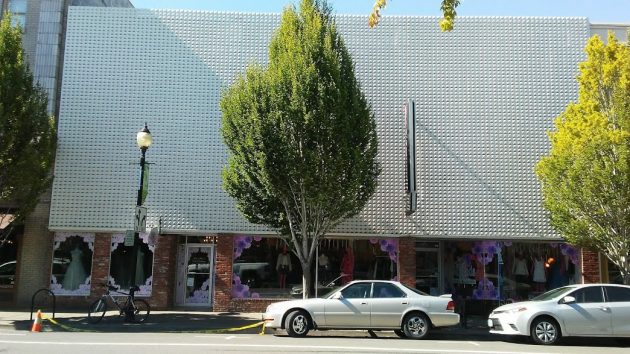 This aluminum façade was modern and functional once. But now it’s headed for the scrap yard.

You won’t be looking at the famous “cheese grater” at 415 First Avenue W. for much longer. The downtown urban renewal agency Wednesday gave the building’s tenants $10,000 toward refurbishing the building’s front the way it looked after it was built around 1866.

There was no debate before the advisory board of the Central Albany Revitalization Area approved the grant request by Mercy House International Inc., the nonprofit that operates a second-hand boutique on the ground floor and hopes to buy the building.

As a first project, Mercy House plans to restore the façade at an estimated cost of $320,000. Restoring the original arched windows alone will cost around $62,000, and the CARA grant is to help with that part of the project.

The cheese grater, installed in the 1960s to hide the deteriorating brick front, will come down first.

Mercy House told the CARA board they haven’t yet started their capital campaign. Their plan is to turn the vacant upstairs into four or five apartments. Rental revenue, they hope, will help support their program of helping women get away from abusive men.

The building in its early years was known as the Kohn & C0. Building.

What else is new on the CARA front?

Newly installed street lights downtown are too bright for some tastes, and board members had wondered whether the lights were dimmable. They’re not, Seth Sherry reported Wednesday. He’s the city’s economic development director.

Also, wayfinding signs approved by CARA about six years ago will finally go up soon. But there’s been another delay as the posts apparently turned out to be too short, and a device to extend them is being made.

In the meantime, for the sake of 1960s nostalgia, go down First Avenue West and take another gander before the grater is gone to make way for a greater look. (hh)